A Good Man Goes to Bioware

Ultima Aiera has posted an article about a Washington Post piece on Bioware Mythic's Paul Barnett, the man behind Electronic Arts' renewed interest in the Ultima series. Although it's an interesting article and Mr. Barnett has been very kind to Wing Commander fans in recent years, there has been no evidence that he is doing anything with 'our' Origin franchise. Nevertheless, here's a picture of the man in his natural habitat: 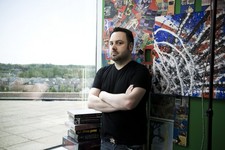 But wait! Computer, zoom in on the boxes in the picture! 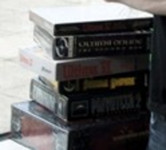 It's Privateer 2: The Darkening! Now that would be a great setting for a social game... You can find the Washington Post article here.

This Durango Packs a Punch

Astro Commander is experimenting with the BWS Intrepid and has mocked up a possible precursor. Although there is no firm evidence that the original ship was externally different, it's been an occasional fan theory that the Border Worlds structurally expanded the vessel when they took ownership. This is based off a comment in the WC4 novel that the Intrepid is the former Confed heavy destroyer TCS Delphi. Astro has slimmed away the flight deck and installed a large cannon as a concept design. It's not just for looks - this new "battlecruiser" may find its way into an upcoming tabletop game! 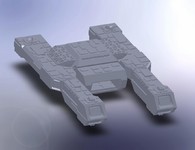 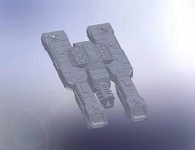 I too had been contemplating that. If you separate it into two pieces you get two hulls that loko like similar design generations to the Southamptons. However, the halves (hangar removed) are quite asymmetric.

Then I considered they might have just expanded the central hull section to accommodate a short hangar. So I made a model that likewise removed the hangar and shortened the width of the ship. But it seemed to be lacking. So I added a massive railgun with the story that this was a second retrofit design of the Durango base design. The railgun takes a long time to charge but can deliver significant damage. Unfortunately, the base hull design of the Durango isn't all that tough so these aren't front-line ships unless heavily escorted.

I have had one printed already but haven't painted it.