Astro Commander has some bigger Nephilim baddies to share with everyone this week. The Hydra cruiser and Kraken "ship killer" complement the existing fleet of corvettes, destroyers and wormhole gates. A fearsome Tiamat was also built last year. The intricate shimmering paint job never ceases to amaze! 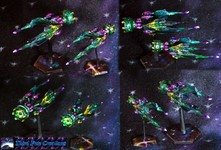 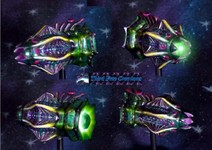 First the ever popular Hydra. I actually modeled two sizes of this ship. the first was a little large, but I like the larger one. The second is closer to appropriate "scale" in so far/little as I generally care about scale. It's always about paintability to me.

The second is the ever popular Kraken... which got so little attention in the game... Of course attention of that sort ends in one way, the only question is which side. Oh and clearly the lens flare is CG. Otherwise, as always, 100% airbrushed.