Mr. Lee has two new Lego Wing Commander pictures to show off. The first reveals a Kilrathi and Terran marine side-by-side. It's followed by a solemn funeral scene set against dark space. The comparisons with WC1 screenshots really emphasize the accuracy and detail here! 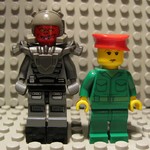 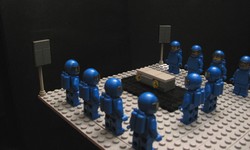 I have created a Kilrathi marine and a soldier based on the scene from Rostov. This is also the first version of my lego funeral scene. It's important to me to only work with real existing lego bricks. I do not change or customize any bricks. I have bought a lot of lego pieces from the USA, the prices are lower compared to Germany. I hope to soon create more and bigger scenes.