Watch Out, Enemy On Your Six!

Wing Commander TacOps Online has added several new features in the last couple weeks. From a gameplay perspective, the "tailing" feature has not been implemented. Selection of stacked objects has also been improved in the interface. Test Game 4 is currently in progress to test out these and newer features as they're implemented. You can peek in at the progress here. 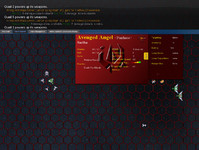 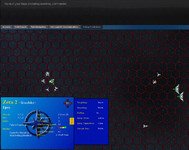 I am pleased to announce that tailing is now fully functional! After a fully successful test case of 1 trial, I am 10% confident there will be no further problems! Unfortunately, like many of the phase5-based updates, only a signed-in account can properly witness how this will change things. As you probably should expect by now from my 'design intent' during a Movement Phase, an extra tab appears at the top, and should theoretically list all the tailing information you have available.

After 4 hours of work, and a fair bit of diving into the inner workings of the jquery-ui widget I was trying to use, I have made a vast improvement to the multi-selector! I honestly didn't think I'd be able to understand what was going on well enough to fix this, but I think I finally pulled it off. Ironically, we're now using a bug-fixed, more improved version of the selectmenu jquery UI over anyone else on the internet! Sadly, I'm simply not interested enough in jquery development to go open up a github fork of the current selectmenu-ui tree, and put in a pull request to that community.

Okay enough blathering, let's deal with this from a WCTOO point of view: the select menus should now disappear when you mouse away from them. I haven't fixed the 'you have to pick something new' bug yet, however, but I believe that this was the key annoyance with them.

Sim Developers Look to the Future

Victorinox found a cool article at SimHQ about the Future of Simulation Games. It's a 'roundtable' article with input from about ten current developers of sim type games. There's a lot of good question and answer conversation about where the genre is going. The last page also includes some discussion about what inspired these developers to get into gaming, and Wing Commander definitely played a role. Check out the full article here.

20mm: What specific simulation titles have been the most inspirational to you in terms of what you strive for in the development of new titles, and why?

Flexman: Everything by Microprose. M1 Tank Platoon and Gunship 2000 offered repeat play through simple mechanics. And I'd also go with Wing Commander for its attempt at a narrative. And a huge shout out to Jane's Longbow 2 which was a fine blend of action and simulation. What's interesting in those choices is (with exception to Wing Commander) are totally dynamic. Grand Theft Auto managed to blend narrative with a free-flow structure. That's a little of what we're aiming for, a blend of dynamic missions with a few narrative threads. Both M1 Tank Platoon and Gunship 2000 had crew advancement (or death), you could get really fond of those AI guys. We unashamedly copied the idea of a crew roster you can develop over missions. They have metrics for flight time, skill level, combat fatigue, aggression. The latter being quite important for AI sorties.

Jane’s titles managed to walk a tightrope of action and simulation. The audio chatter went a long way to provide a sense of battle and excitement. F15 was super with calls of “shack” and “check your panel”. Even Falcon 3.0 has some amusing pilot chatter. All of that we scripted for our game too just because it added so much to the feeling of a Jane’s simulation and it’s not technically difficult to do. It adds value at little expense.