Astro Commander has finished painting an entire Kilrathi fleet worth of his 3d miniatures. There's some absolutely beautiful airbrush detail here. Check out the flood lights that have been painted on the Dreadnought! I really dig the reddish overtones as seen on the ace fighters from WC3. His first paint job, the Tiamat, can be seen here. A new Kraken model is also in work. 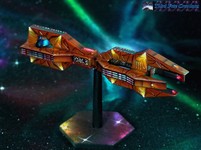 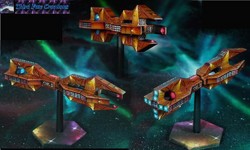 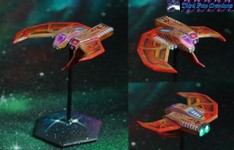 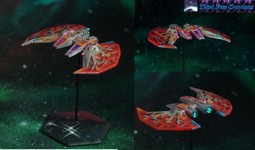 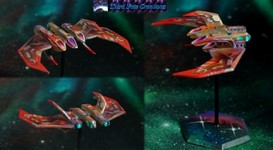 Thanks for the comments guys. I plan to use these for a fleet game at an upcoming con in Denver this February. Finally processed the kitty images.

One of my favorite attributes on the dreadnaught is how, if you're real careful you can paint the "windows." I have it 3d print on the inside of the support structures. I did this because there is no reasonable way to paint those windows without physical features helping you. Half the windows however are pure freehand as a close look at the unpainted dreadnaught reveals.

I have a Midway and Tallahassee nearly complete. I also just finished the rendering of a Kraken and hope to get it in a few weeks. I can't wait to paint that one.

Scene 204, Blair "interrogates" a captured pilot, who ends up being the man he either did or did not help at the start of the game. Small world? Small universe! (The pilot's name is Bean, according to the novel; the Baen novel.)