You've seen their cartoon equivalents before--now take a look at this great group photo of the Privateer 2: The Darkening development team! Take a close look at the details, too--there's an area on the wall for each Tri-System planet! Special thanks to the always-gracious Paul Hughes for identifying the lineup. 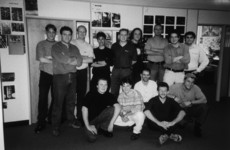 Scene 41 - "You bet, captain!"; this is another portion of a briefing (possibly a generic Lexington briefing-ender similar to the 'love that boy's spunk' bit in Wing Commander III).