The Price of Freedom is Eternal Publicity

If you enjoyed our recent Planet Hollywood pictures then you may find these additional 'celebrity' pictures from Wing Commander IV's 1996 launch promotion of interest. In the first Mark Hamill appears on a radio show to discuss the game and in the second Hamill and Chris Roberts sign copies of Wing Commander IV. I wonder what the white sheet with the Black Lance logo on their table is. 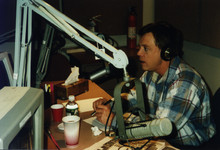 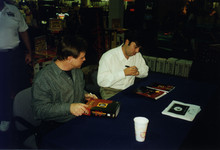 Scene 30 shows... Blair walking into the map room for a mission briefing. They can't all be epic space battles that decide the future of all mankind!