Starcraft 2 Found Under the Influence 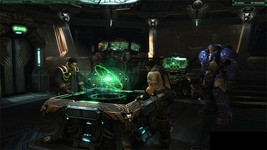 Game Informer magazine recently conducted an interview with Starcraft 2 lead designer Dustin Browder. The piece is actually quite lengthy and delves into a number of topics, and there's quite a bit of discussion on Wing Commander. The neato part is quote below, but you can check out the full article online here. It's definitely not the first time that this has come up.

One of the most interesting choices in the game from my point of view is the between-mission segments in the ship where you can click on different items and talk to characters and learn additional information. Many players have mentioned how this recalls the Wing Commander games, and it even reminded me a little bit of the Mass Effect series. What inspirations were you drawing on when you came up with these segments, and why did you feel that they were necessary for the game?

Certainly Wing Commander is one that was talked about frequently in the studio when we first started this project. I don’t think Mass Effect was even out yet when we started creating this, so that wasn’t a reference we could use, but it was one we could use later on.

We’d always had these elaborate briefings in StarCraft. Then there were cutscenes using the engine in Warcraft III. The team had always wanted a chance to do more with story. We knew that for StarCraft, we really needed to find places to innovate with the game, and we knew that solo play was an opportunity to do something a little bit new. We wanted to give players some choices, some options, some gameplay that hadn’t existed in our titles before.

I know Wing Commander was one that was definitely talked about because it was such a story-heavy game. We’ve always been story-centric with our RTS games ever since StarCraft. A little bit in Warcraft II, but especially since StarCraft, story has always been really essential to these experiences. It was an idea that was already here when I started at Blizzard. I know Rob Pardo and Chris Metzen had been talking about that for several years; I’m sure there were many people around the studio that had already been talking about this kind of Wing Commander approach. Obviously we had lots of directions we were taking it before we settled down on exactly what we ended up with.

I think what we’re hoping to do is try to bring the clunky story-telling tools that we had from Starcraft and Brood War and Warcraft III and try to bring them into the 21st century and really push the story and give players opportunities to experience it in new ways that aren’t just more cutscenes. We wanted players to have some kinds of choices about what they wanted to do. I think ultimately, we would have liked to have done more choices, but I think we’re pretty happy with the kinds of choices we provided players.