Astro Commander came looking for information on how to get miniature (physical) Wing Commander models and mostly came up empty, so he made his own! The fleet so far has been built with a 3D printer and is fit for painting. It includes the Midway and a Tiamat, plus a small flotilla of escort fighters. Several Confed fighters and a cruiser have also been built on a larger scale. Since all the leg work to get these made is done, he's passing on the fun via the Dream Foundry storefront. Fellow fans can buy additional ships at roughly cost here. 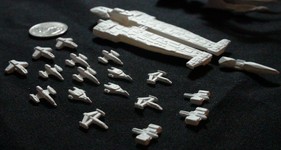 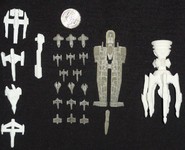 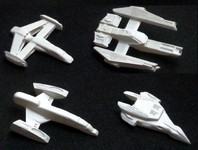 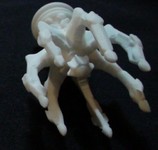 Well after a lot of effort I've loaded a few models. I'll probably keep them available until I tire of it or it seems like there is no interest. I recommend detail materials (white detail, transparent detail, or black detail. These show grain but any other material is worse. All parts are designed optimally to be printed in detail. It also seems the detail material requires some cleaning with hot water and a brush, from the gel support material.

Fighter combat: These are generally between 25 and 40mm in length, optimized for painting (IMO) but still usable on a 1 and 1.5" grid.

Fleet combat: Capital ships are centered around 75mm while fighters are between 1 and 1.5cm (roughly). They work best on a 1.5 to 2" grid

Collectable: Certain ships, generally the ones I really like and want bigger, will be scaled up to around 150cm. But expect these to be pricey due to material required.

French Wing Commander fans have one more chance to catch the movie on Wednesday morning. It's airing October 6 at 10:10 am on CINÉCINÉMA. For a more permanent viewing option, the first release of Wing Commander dubbed in French was also released earlier this year. The going rate is just EUR 4,58.