JasonRocZ has posted another star trio of fighters from the Arena 3D Mesh pack. From left to right, these are the Rapier Blade, Vanguard and Cavalier. Although the ships might look unfamiliar to some, they are based on the authentic F-54 Rapier II frame - from Super Wing Commander! It never ceases to amaze me that Gaia Industries pulled from so many original sources to fill in the universe of Wing Commander Arena. 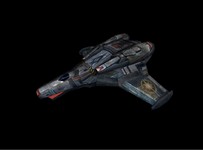 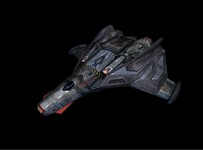 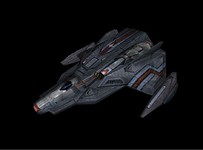 F-54 Rapier II Blade - The Rapier II replaced the aging CF-117 in 2654 and immediately made an impact: Dragon, Bandit, Maverick, Maniac, Prankster... a disproportionate number of the war’s top twenty aces served with Rapier II squadrons. The Blade is the modern version of that famed ship, updated by fire through its service against the Nephilim.

F-44 Rapier II Vanguard - Named for their exceptional service against the Nephilim. It was a Vanguard squadron which led the first strike through the gate against G#38KMSx-Red. All sixteen Rapiers were shot down, but they went out fighting: an analysis of their flight recorders showed a 129 to 1 kill ratio. Carrying Porcupines and a deployable turret, Vanguards are often used as minelayers.

F-44 Rapier II Cavalier - When it comes to fighters, the Cavalier is the crown jewel of the Epsilon Sector’s arsenal. A true artist’s ship, the Cavalier’s weapons are focused around ranged engagements. An experienced Cavalier pilot will make use of his lasers and ionic pulse cannons to allow him to avoid missile barrages from enemy bombers.

Did you know EA runs some killer deals on the weekends? The EA Twitter reports that Dead space is $10, Spore is $20 and Mirror's Edge is just $5. These are all the digital download PC versions. Find the sale details here.