Remember that middle Excalibur that TonViper was building for the Homeworld 2 mod? He was able to translate the model to his current tool set, and the ship has been retextured. The plan is to still include it in some later update to Homeworld 2. It's looking sharper each time we see it! 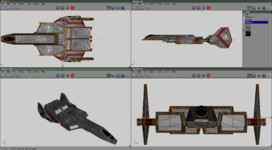 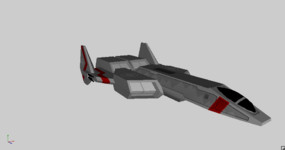 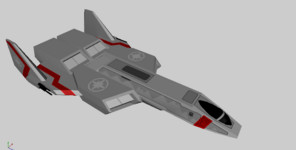 I had forgotten which program I used to model this ship back then, so I had to take a look at this topic. I'd thought it was blender, so I downloaded and installed it, only to find out I couldn't figure out how to use it.

I managed to salvage the model, but I had to restart on the texturing. That was probably a good thing, since I've learned a bit in the time since I worked on the model last. I also found it a good idea to remap the UV a bit, since some elements didn't have the resolution I needed, while others were needlessly detailed.

I consider the base surface texture a placeholder, but I'm not sure if I can find anything that looks better, so I may end up keeping it anyway. I'm currently mapping out the elements I want on the texture before I get onto the detail work.

It will eventually be bump mapped when I get it ingame in Homeworld 2, but I'll have to teach myself how to create a bump map first. In any case, I want to finish the diffuse texture first before getting into that too much.