There haven't been many Collateral Damage updates recently, but JasonRocZ posted these shots to show that work continues. The first two images are the old version of the TCS Coral Sea, and the three newer shots demonstrate some real improvement. The "weird shapes" have been toned down and the textures have a better feel to them now. Most of the craft that are featured in the game are either Confed or Nephilim, but Jason is looking at Firekkan or mercenary forces next to eventually round out the story. 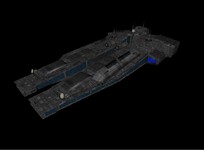 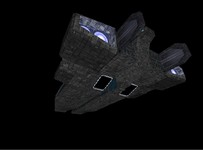 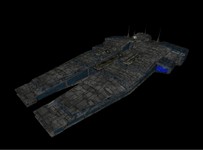 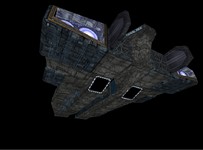 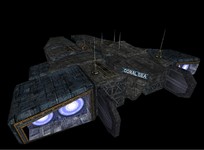 I want everyone to know that the project is still moving forward. Also with the new Arena model archive that has recently been made public, I'm also trying to implement a few of the actual Arena models (with somewhat different textures). They will also have to be somewhat different (Poly count numbers), but to have these as a basis is pure awesome!

One thing that did take me a long time was to work out the gameplay as it related to the stats of a few ships and weapons. For instance, in WCCD I have implemented the Neutron gun into the engine. It has taken a lot of time to get them the way that are in previous games. The Neutron gun was slow moving, also had a long refire delay, but packed a pretty big punch. I made that similar to how it was in previous games without sacrificing that Secret Ops feel.

I want you guys to know that this project is not dead. Look for new updates within the coming weeks. :) Cheers!