The WC Saga preview trailer has been released. You can download it here or visit YouTube. It clocks in substantially larger than the teaser at 85 megs. The clip includes a mix of explosive space scenes and some character CGI. Here's Tolwyn with the dramatics:

2nd Lieutenant David "Sandman" Markham's training took a cruel twist when his training carrier, the TCS Wellington, was ambushed and destroyed by the Kilrathi while cruising in a supposedly safe system. Unlike most of his fellow trainees and trainers, Sandman has survived to fight another day. But the days ahead are dark and foreboding. 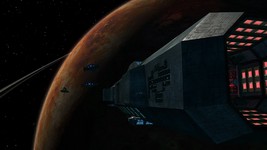 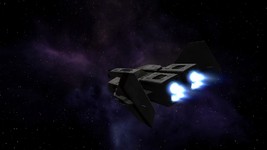 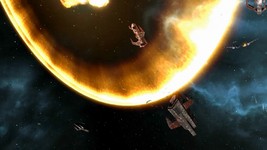 The fight Markham has been prematurely plunged into is growing more desperate by the day. The Kilrathi are advancing on every front. Confed fleets are being forced to retreat in disarray. Terran losses are mounting catastrophically. System by system, the Kilrathi are pressing closer to the heart of the Confederation, hungry for the kill and the thrill of ultimate victory. Hope has run thin, and the total extinction of the human race seems all but inevitable.

Victory and survival for humanity can only be bought at a terrible cost. Gather your wingmen and your courage and prepare to play your part in humanity's desperate gambit as you face the Kilrathi foe. It is a time where even average men must reach inside themselves and become heroes. Answer the call. Face the enemy. Make your mark as the Confederation faces its darkest dawn.