Last week I jokingly asked when the Wing Commander mods for Starcraft 2 would start, and CptnEisen took me seriously! There isn't actually a full scale mod in the works (yet!?), but he mocked up these pictures to demonstrate how easy it could be. There's a Yorktown carrier in one shot and some Nephilim Devil Rays in another. The carrier is set up like a starport, so it even builds/launches fighters. These images are really fun, and they demonstrate some huge potential! 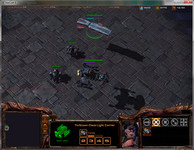 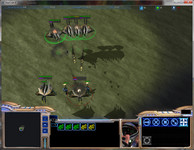 The downside to a carrier producing fighters this way is that the carrier can not move or attack whilst it is building... I might go back to the Protoss way of building ships - But this may limit the ship to building only one type of fighter (I want the Yorktown class to build Arrows AND Thunderbolts). The other option I might explore is having the carriers hold the fighters the same way a bunker holds marines... Working this way, I could still have specific fighters with abilities (Vesuvius building cloakable Lances, Bombers with a special Torpedo attack, etc).

On another note - I managed to get animations working. Hopefully I can figure out how to have the fighters doing barrel rolls. :)