Here's the latest shots of Michelle D's Firekkan model. Some basic body armor/clothing has been added and a very preliminary body is now present. Much of the body is still a placeholder as the exact positioning and structure gets tweaked. You can help provide feedback at Crius.net 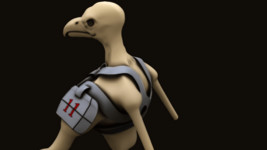 I think I made a close match of the straps around his body.

Electronic Arts has announced Darkspore, a new sci-fi game for its 2011 lineup. To be more specific, it's an online, science-fiction action role-playing game based on the Spore franchise. It is a story-driven hack-and-slash moreso than a sim-type game, but it sounds like there will still be some nifty creature customization as well. As already well demonstrated, there are some potentially fun possibilities out there. The game is scheduled for a February 2011 release. 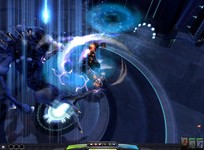 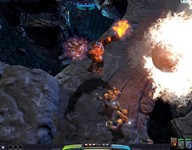 Darkspore will feature dynamic, fast-paced action as players battle across alien worlds to save the galaxy from the mutated forces of Darkspore in a four-player co-operative and full single-player campaign, as well as intense multiplayer battles. In order to defeat the malicious Darkspore, players will need to collect an arsenal of living weapons - genetic heroes with different combat abilities - and upgrade them with tens of thousands of collectible body parts and armor.

Darkspore will feature three unique classes of five different genetic hero types, with a limitless number of upgrades and customizations available through the parts players collect on each planet level. As players progress, Darkspore builds in intensity, with new planets and enemy forces requiring players to strategically select the right squad and ability combinations to succeed in their missions.