There's another update to JasonRocZ's Arena-inspired Nephilim craft, the Tarpon. It's a pretty good rendering of what started as a small red silhouette in Star*Soldier, and we're anxious to see it working in the vision engine. The skin of the craft looks particularly effervescent now. 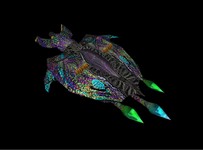 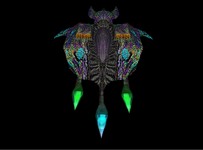 I revisited the Tarpon. The textures and a few of the shapes were updated quite a bit. I wanted this to be similar to how the Wasp fights with some type of Swarmer missile racks. Although the ship is not really an interceptor, the Nephilim Swarmers sounded like a fairly cool idea, so I added something of a honeycomb effect on the top of the ship.

Hopefully I can get done with all these ships at some point. I've already implemented most of them into the engine, but there's a few of the Nephilim which still need to be done. I'm also still working on the Earwig. Enjoy.