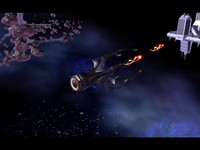 Major Payne has unveiled Wing Commander Invasion's first Nephilim ship in the Empire at War game engine. The shot below shows a Tiamat firing its main plasma weapon. Right now he is testing a ten second refire delay. Each long range shot disables a hardpoint on a capship or structure, but the large Dreadnought has a weakness for coordinated fighter and bomber attacks. Here's some more information on the Nephilim faction being built into the game.

Hello again all. I finally decided to include the Nephillim as the third side (I'll go into the Border Worlds after). The reason for this is that I want to try to stay as close to the original mod as possible, and even though the Border Worlds were given consideration, I felt that the side was more of a mish-mash of Confederation ships.

With this choice I encountered one problem. All the Nephillim models from the original project were basically a pile of rubbish, so I had to find something for the new starbase model. Thank the lord for WCNews archive. Now I don't know if Nephillim ships are basically "living" entities but they sure seem to be, so the starbase is more of a "mother"-ship than anything. It will, like the other starbases, grant access to ships and upgrades at the various levels and as such the current list of ships is:

In other news I have begun to compile the v2.5 patch. This patch already has some tweaks and a couple of minor editings, but the long part begins now. Special weapons have not been decided on at this current time, but the Sensor Jammer and Corrupt abilities may be used.

Anyway, any questions from anyone please dont hesitate to ask.

A new contract was announced today for the US military's purchase of Joint Helmet Mounted Cueing Systems for use on F-15 & F-16 aircraft. These futuristic systems allow a pilot to designate and lock enemy targets by simply looking in their direction. More than one pilot can wear their own specially enabled helmet in two-seater aircraft and independently target different opponents or attack sites. This ability can also extend to wingmates. It sounds like it'd be very effective in a Wing Commander game too!

First used in Operation Iraqi Freedom, the multirole JHMCS gives flight crew members the ability to rapidly acquire and designate a target simply by looking at it. By placing an aiming cross, projected on the helmet visor, over the desired target and pressing a button, pilots can quickly and easily aim weapons and sensors to designate and attack airborne or ground targets. The JHMCS visor also displays tactical information, aircraft altitude, airspeed, g-force and angle of attack to increase the user’s situational awareness.