It's been one year since Origin founder Richard Garriott has returned from his trip to the International Space Station. He recently conducted an interview with the Austin American-Statesman to continue to advance the cause of private spaceflight. His new interests also include exploring the concept of suborbital space/sky-diving and a variety of conservational measures. Check out the full article here.

There's nothing official to discuss yet, he said, "but there's no question my name will be reassociated back into gaming in the not-terribly-distant future."

Mod to Mod Gets More Ships

Here's a couple more shots of Standoff with WC3 ships added in. The Gothri has been converted to the Vaktoth and the Rapier II with the Hellcat V. Note the differing VDU image and targeted craft. Those kinds of technical tweaks are what -danr- is currently improving. 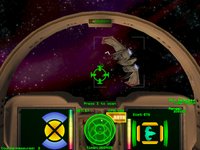 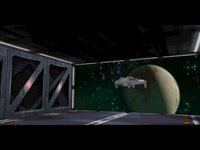 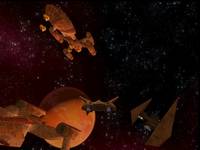 Here's a Vaktoth, seconds before I got frustrated with the fact there's an armistice on and iced the furball. Unfortunately shooting him down seems to get Spoons on your case.