From The Outside Looking In

It's not that often that we uncover new tidbits of behinds-the-scenes material from the Wing Commander film, but we recently uncovered this cool shot from the movie's set. It shows a camera rig set on a track for steady shots of the bridge set. Anyone want to guess whether this is the Tiger Claw or the Concordia? 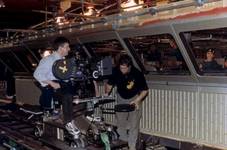 The 'E' series is the second half of the game's long series of missions set in the T'lan Meth system. F is where the game's "in-flight choice" concept finally comes into its own, with a variety of outcomes stemming from your performance in the Cult of Sivar rescue mission.