The Wing Commander Invasion mod recently hit a few snags relating to starbase implementation, but those have been worked out and progress continues. The game's AI now properly uses Wing Commander ships and conducts ferocious battles. New pictures below show the computer controlled fleet in action along with the standard space station that will be used. 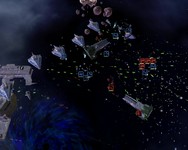 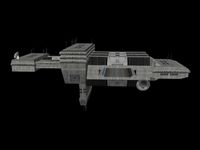 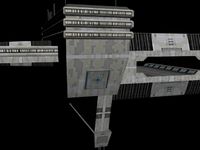 So as the title states, I've managed to get the AI to upgrade its starbase AND build all its classes of available capital ships and fighters in skirmish (I'm not worried about the GC aspect at the current time). On this particular map the AI did, infact, capture all but one of the available mining asteroids, and it took around 45 minutes to get to building the Midway (which acts as a final capital ships class), although I never seen the Vesuvius. Those two Bengal Class ships did manage to take out at least three of my defending Acclamators and had I not have had two more in reserve the AI would probably have won. I'm just glad the other 6-8 capitals the AI had produced didn't manage to get to my base, but at least it works.

Today we have a short table showing the comm 'types' used in Wing Commander Prophecy. Unlike previous games, Prophecy featured some fifty-odd wingmen... and every single one needed to have every single type of taunt recorded (well, needed is an interesting point - you might not have had that dedication in a non-Origin title).