After a full year of replaying the Wing Commander series, dedicated Wingnuts have reached the end of Wing Commander Prophecy. The final four missions in the Kilrah System are up this week. Next week is a down week for any players needing to catch up, and then Secret Ops will start up in January. Here's Lorien with some recollections from Kilrah. 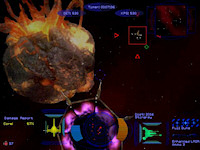 Kilrah 6: This is it. The final assault against the wormhole gate that the aliens are using to bring their forces into our space. Finley gives us a quick briefing on the science behind the gate before the CAG tells us how we're going to take it out. The Midway is going to withdraw to a safe distance to draw the enemy's attention while we escort a Marine LC in to board the command centre and take out the shields protecting the cooling towers. Once those towers are taken out, it's game over for the bugs. I'm questioning the logic of taking only two Vampires along, though, as the aliens are going to defend the gate heavily.

My fears are given form when we arrive at the gate. An ace fighter and 4 Mantas are guarding the gate, shortly joined by a number of alien fighters. I launch a MIRV from long range into the thick of the alien forces before moving to engage the ace. This dogfight is a true test of skill, with both of our machines evenly matched. Our skills are certainly on different levels, though, and it's only a matter of time before the alien's ship is debris. The next stage of the battle is a wild melee and I almost lose track of the situation as we battle. but Dekker eventually comes on the comm and alerts me to the first shield being taken down. I break away to take out the tower, using a MIRV as I rejoin the battle to keep things clear. 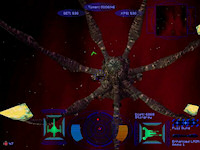 When the CAG comes online with the latest plan, I'm beginning to wonder how desperate things truly are. We're to pull back and refuel, collecting two more fighters and Blair in a marine LC while we're there. Once that's done we're to escort Blair back in as he takes down the shields on the last tower himself. Surely there's a commando unit or someone better suited for that sort of battle than Blair, but he seems quite insistent, telling my that my father would be proud before we head back. The aliens have taken the time to reinforce and I'm glad for the new load of missiles so that I can use a MIRV to thin out their numbers before engaging the alien ace and taking him out. The dogfight continues to be intense around the wormhole as Blair makes his insertion and I'm passing 60 kills by my count before he manages to take down the last shield and let me destroy the tower. We clear out the last alien fighters are make a break for it before the wormhole's explosion takes the rest of our fighters out. In the confusion, I lose track of Blair's LC.

Don't forget to check out Dave's photo and video archives from the replay! The Community Replay is one of the nominees for 2008 Fan Project of the Year.