Standoff status reports are coming out in quick succession these days, and there's more good news from the team this time. In a recent website update, Eder indicates the final episode is making good progress across the board. And we get a first look at the new cutscenes! The team is also hunting for stray bugs in the first four episodes, so drop them a note if you've encountered any.

Well, the previous update was a few days early - and this one is a few days late, so everything balances out :-).

There's been more than a bit of progress these past two weeks - good, solid progress on every aspect of the project. First up, if you look on the progress page, you'll see that "additional graphics" has at long last gone blue. So, blue is now the dominant color for episode 5. Progress is also very good for in-flight voiceovers, and I've changed them to green. I actually had some doubts about that - although Tempest has processed quite a lot of voiceovers recently, we still only have a little more than half of them ready to use in-game. Still there's very little left to record, so green it is.

Missions have also made solid progress, though not sufficient to affect their status on the progress page. Pedro delivered his mission as planned and is working on another. Quarto expects to get at least one more mission done before Christmas. And Pierre, though as busy as ever, is reporting progress on his missions too.

Finally, cutscenes and music. I'm still finishing up on the last five cutscenes, but I expect cutscenes to go blue in the near future. Music is a little further behind, but Michael reports he will complete the intro music this week. In every episode, the intro is always the most time-consuming (...though something tells me the outro might be even more time-consuming this time round :-) ), so this is definitely good news.

Speaking of cutscenes, we've added more new screenshots on the screenshots page. The first of these is taken from a mission (I never quite realised how big that Starbase is compared to other capships :-) ), but the others are from cutscenes. As you can see from the subtitles, things are definitely not looking up this episode...

By the way, since Episode 5 is going to be the end of Standoff, our testers are now also testing previous episodes in search of bugs that still need to be fixed for the final release. So if you have encountered anything odd while playing Standoff, please report it at the forum. 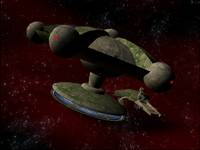 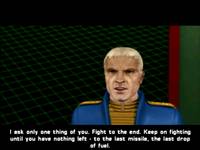 The Fry's Electronics online store has EA Replay in stock for just $4.99. For those unfamiliar, EA Replay is a PSP collection which includes ports of Wing Commander and The Secret Missions, as well as twelve other classic SNES and Genesis titles.

EA Replay is a great collection that turns your PSP into a full arcade. It features 14 older EA titles that thrilled gamers in past years. Whatever your favorite style or genre of game, you'll find something that you can enjoy playing for hours. Games include: Mutant League Football, Road Rash, Road Rash II, Road Rash III, Syndicate, Ultima - The Black Gate, Virtual Pinball, Wing Commander, Wing Commander - Secret Missions