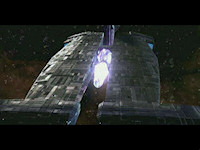 The pilots of the Midway have broken through the blockade at Hrissith and broken through to Kilrah. Wingnuts are playing through to the second Kilrah mission this week and will conclude the playthrough of Wing Commander Prophecy next week. Here's Dave's report on the famous Plasma Gun mission.

H’rissith 6: Thanks to my success on the previous mission, the Midway will use its plasma weapon against the alien fleet heading our way. The CAG emphasizes that we’ll have to work twice as hard on this mission to ensure success. I’ve been assigned to plant a thermonuclear primer on the center part of the fleet to make sure the plasma shot from the Midway has the correct catalyst for maximum effectiveness. All available fighter wings from the Midway will launch to deal with any alien fighters. My objective is to put the primer on a transport at the heart of the fleet. To ensure I don’t make a targeting mistake, the primer will only lock on the transport. Once the primer is on the transport, I’m to get as much distance from it as possible to avoid the blast. The CAG emphasizes for us to stay focused and wishes us a successful mission. 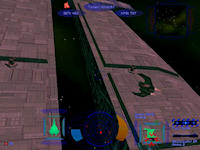 Together, we all meet the alien force at the first nav point. There is a destroyer, cruiser, and carrier here along with the transport and a bit of alien fighter cover. Some Vampires take out a Moray that was in my sights, and I gun down a Manta. My bomber takes multiple hits thru its shields and armor, and I know I can’t afford to keep this up if my bomber is to return in one piece. Fortunately, our fighters are around to bail me out and I commence my run on the transport. It takes two attempts for me to get the primer on the transport, and one of our pilots is lost for good. Finley congratulates me on putting the primer on the transport, and emphasizes to clear the area. I lock afterburners, and the Midway shoots its plasma weapon. 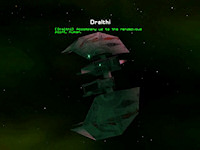 I see the plasma shot go off, and manage to see a flash from the hit to the transport. All of the capital ships are wiped out in a spectacular explosion and I manage to get clear of the blast to land on the Midway. The shields of our carrier hold against the large amounts of debris from the shattered fleet. There is a large crowd to welcome and congratulate me, and I see Commodore Blair. He struggles to say something, and then decides to salute me. I return the salute, and he nods his head in recognition of my accomplishments. I get a few pats on the back from Maestro after checking my performance score, and manage to see the carnage from the blasted bits of the capital ships from the window in the Rec room. We’re all celebrating there, and Stiletto comments that more plasma guns like the one on the Midway could carve out a corner of the universe.

Electronic Arts has announced that it is expanding its layoff plans and will be closing at least nine studio locations. One of the closures will be at EA Black Box in Canada. The studio will actually be moving across town to the large EA Canada campus where Wing Commander Arena was managed from. The 6% staffing reduction has also been increased to 10%. There will also be some game cancellations.

EA is implementing a plan to narrow its product portfolio to focus on hit games with higher margin opportunities. The company remains committed to taking creative risks, investing in new games, leading the industry in the growing mobile and online businesses, and delivering high-quality games to consumers.