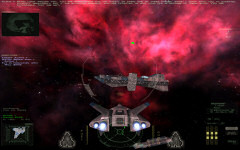 The Wing Commander Saga mod project hit an important milestone recently - it went 'gameplay complete', meaning that it's completely playable - but not yet perfected. Here's their announcement:

The Wing Commander Saga main campaign will consist of 7 episodes and will have a grand total of 50 missions. We are happy to announce that as of a few days ago, all of the missions for the first 6 episodes are now "gameplay complete".

What that means is each of those missions is now completely playable. However, there is a difference between "gameplay complete" and "done". "Gameplay complete" means all the enemies, objectives, secondary goals, and so forth are in place and functional, so that you could play through the mission and the whole thing would work. To get to "done", there is some additional art that needs to be added, as well as the ever present process of polishing and refining balance.

However, we are very excited to reach the "gameplay complete" milestone on the vast majority of the missions. The game is almost completely playable, and now it is time to add the real detail work.

Haven't I Seen You Before?

The University of Wisconsin's The Daily Cardinal has published the ordinary game-movies-are-awful article, this time enjoyably titled Video games tend to make for 'Payne'-ful film adaptations. This one differs slightly from the norm by suggesting that modern game films are an excuse to show too much skin -- maybe I need to start watching these things again. It claims Wing Commander is part of an earlier, if still tepid, era:

Beyond the aforementioned, T&A-heavy films, though, video games have not adapted well to films. Who can forget the “Super Mario Bros.” movie from the early ’90s? Well, everyone, actually. Who doesn’t remember sitting with friends watching Freddie Prinze Jr. fly his jet to glory in “Wing Commander?” Actually, statistics show that only three people ever saw “Wing Commander,” and they were all in the film. “Fatal Fury?” Pass. “Street Fighter?” Collegehumor.com did it better on a shoestring budget 13 years later. “Mortal Kombat?” Scorpion beckoned with his calls of “Get over here!” but no one heeded his call.