Award-winning artist NinjaLA has put together two nice, even concept sketches. They're different takes on Kilrathi fighters - the first is based on the early Privateer Online artwork while the second is a stylized version of the Wing Commander movie's KF-100 Dralthi. 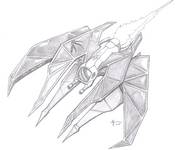 This is the Star*Soldier gloss for the first systems page:

CONCEPT: This is a thickly veiled guide to Wing Commander Arena's different maps. Nine systems, nine maps -- coincidence? I think not! This was actually one of the sections that helped sell the project. The original version was a FODORS-style travel guide to distant planets, more focused on things like what the hotels were like at the Bearpit. When we transitioned to a magazine for mercenaries instead of a pilot's bookcase, we were left with what you see today. I will note that I had an awful lot of leeway here - the team chose the sector, but I got to pick which map went where and (in most cases) just what was going on.