References to Wing Commander appear in the strangest of places. Here's a review of Final Fantasy Tactics A2: Grimoire of the Rift (?!) at PopMatters which compares the game to... Privateer?

The new tweaks induce such massive amounts of grinding that the game feels more like work than the epic battles of previous games. It’s a similar problem that the classic game Wing Commander: Privateer suffered. In that game, you didn’t stand a chance on the actual “story mode” until you’d spent hours building the ultimate space ship. Both games featured very clever and addictive game design, but with Final Fantasy Tactics A2 there isn’t really a point at which you can stop grinding and say, “I’m ready to hear the plot now”. It may be a personal qualm of this reviewer, but there comes a point where I’m ready to hear some story instead of doing more grinding. Yet the plot isn’t inhibited from starting because your characters need to be super-strong as in Privateer. Instead, the problem is that the plot missions are completely jumbled with the grinding ones, so that the two actions become confused.

Bonus points for actually remembering the 'Wing Commander' in the name. 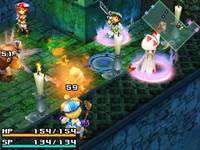