Chris Roberts Heads to the Hills

Chris Roberts is amidst the Swiss Alps in the lakeside city of Locarno for the world premiere of Outlander this week. A press conference for the film was held around noon today. The event coincides with the 61st Film Festival Locarno. Chris sat on the panel along with director and co-writer Howard McCain, co-writer Dirk Blackman, and stars Jack Huston and Sophia Myles.

If you need your memory refreshed, Chris acted as producer for the film. The premiere itself was held later in the evening in the Piazza Grande which is an amazing outdoor venue with seating for eight-thousand people! They (including Chris) also did a lot of interviews, so keep your eyes open for those in the future. 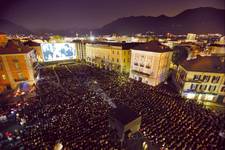 This is the Star*Soldier gloss for the second letters page: