NinjaLA, whose award-winning Wing Commander Arena artwork now hangs in one of the finest galleries in New York City, has completed another piece. This one shows a Kilrathi warrior, a Scimitar, a ground installation and ties them all together with some very elegant otherworldly nature. Wallpaper hounds will find that it is available in 1024x768, 1600x1200 and 2048x1536 versions. 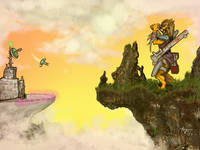 Wingnuts are playing through the whole series again and posting their battle accounts to the Forums. This week covers the second half of Heaven's Gate and Tesla 1-4. DaveO recalls Novaya Kiev:

During a card game, Angel, Doomsday and Spirit discuss the upcoming action to try and retake our space station. Angel tells me about the Admiral’s lack of respect in regards to my combat performance. Doomsday is his optimistic self and predicts that the mission is suicidal. Spirit and Doomsday wonder what’s going to meet up with us at Heaven’s Gate, but Angel understandably can’t make a comment. I meet up again with Spirit, and she confesses that she received a mysterious email about her fiancé Phillip. Spirit has no idea who sent the message and I ask if she’s a part of something I’m not aware of. Spirit adamantly expresses her firm allegiance to the Confederation, and I urge her to bring it to Angel’s attention before I am forced to.

Upon takeoff, I receive a communication from the Concordia. There is an emergency mission to the Talbot system with a ship carrying very important data. Two Drakhri fighters meet me on the way to the jump point. Upon reaching the courier ship, I find that it’s under attack by Sartha and a Ralathi cruiser. The courier is destroyed, but not before ejecting a data pod. I take care of the Sartha, though the Ralathi is probably helping a bit with its flak. Two torpedoes to the Ralathi destroy it, but I make a mental note to be very wary of its anti matter guns. A direct hit from one shot will take down my shields to half strength, and I can count on at least a few shots directed towards me. I fly back to the Concordia, and apparently the data from the pod concerns Spirit. Admiral Tolwyn requests Spirit to come to the bridge, and Angel wants to be there but Tolwyn wants to handle matters personally.