Red Baron has either an especially keen eye for detail or an obscene love of Star Trek... both things we celebrate in these parts! He noticed that multiple weapons from Wing Commander IV appeared during the run of Star TreK: Enterprise. He's provided several examples from "Shadows of P'Jem" which feature the Black Lance and Union of Border Worlds Marine rifles: 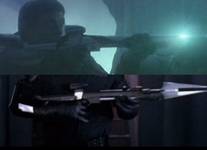 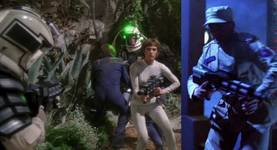 That's right, it's another Lord British in Space update -- and we're going to keep running them until we can manage to take up a collection to send Chris Roberts back in time to medieval Europe. Collect Space has teamed up with Astronaut Garriott to offer Earth Portraits. For only $500 you get a personalized photograph of you[r general area] taken by Garriott during his space mission! It's like a very expensive version of Google Earth! Here's the science behind it:

While Richard could just point his camera, a Nikon D3, out the station's windows and snap photos, what makes this project possible is the special software he will be demonstrating for possible use by future ISS crewmembers.

Windows on Earth is a revolutionary tool developed by Technical Education Research Centers (TERC) and the Association of Space Explorers (ASE), designed to simulate the actual view out of particular windows on the ISS, with targets for photography clearly marked. The software has been developed in collaboration with the astronaut members of ASE and NASA Johnson Space Center's Crew Earth Observations group, and supports their ongoing science research.

The Earth Portraits targets, specified by the longitude and latitude coordinates you choose will be loaded into the Windows On Earth tool to optimize Richard's opportunities to capture your chosen location.

[Editor's Note: all joking aside, I'm sincerely jealous of anyone who has Richard Garriott take their picture from space.]