Origin Systems, Inc. today released a first look at the box art for Wing Commander II: Vengeance of the Kilrathi. It features a pair of Super Dralthi destroying a human transport ship. I hope the Tiger's Claw will get there in time to save the day! You can check it out below. For more information on Wing Commander II you can access keyword 'Wing Commander' on America Online or Door Forum #5885.8988 Subtopic LJ-X58 on CompUServ.

LucasArts - the company previously best known for ripping of Sierra's "Quest" adventure games -- is at it again... and this time they're taking aim at Wing Commander! Presumably impressed with Wing Commander's stellar sales, Lucas announced "X-Wing" at the recent Comdex show - a space shooter which puts the player in the cockpit of the X-Wing space fighter featured in several Star Wars films.

As you can see from the screenshots below, this thing isn't going to hold a candle to Wing Commander. Look at that ugly gray cockpit -- with damage measured in percents? And what are they fighting, a puke-yellow square? Did we need more evidence that textured bitmaps and not 3D objects were the wave of the future?

The game is being developed by Larry Holland and the rest of the team which brought you Battlehawks 1942 and Battle of Britain. Big mistake, LucasArts! This kind of game needs an epic storyteller and not some flight school washout. Imagine Andy Hollis running Wing Commander instead of Chris Roberts!

So, be wary of this title. I think it's going to help prove why there hasn't been a 'Star Wars' movie in eight years! 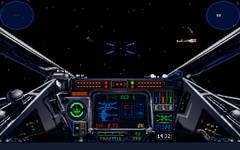 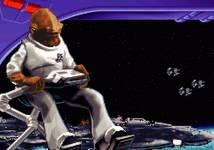 By now you've all seen the first screenshots of the Wing Commander 2 Kilrathi... and I'm sure you all feel the same way I do: disgusted and betrayed. What's the deal, Chris Roberts? In the original game the Kilrathi wore elaborate body armor and were - more often than not - bright green. Now they look like big talking jungle cats? Way to "cute up" the franchise! We can only hope they haven't similarly changed the looks of our favorite Wing Commander heroes - I don't want to have to think anything bad about Shotglass, Hunter, Iceman, Knight, Commander Halcyon or Jazz. I personally refuse to accept them as an official part of the Wing Commander universe.

It's time for your daily reminder: we're just 273 days away from the launch of Chris Roberts' next opus, Strike Commander!

Why so long? Strike Commander is a massive title that will require months and months of programming to 'get right'! With that much lead time, we're sure it will be an especially smooth gaming experience. 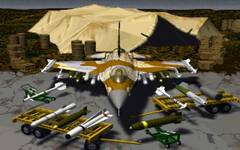 Locals wonder what a single man could possibly want with so much extra space -- but then Garriott is no stranger to controversy, having recently made waves by purchasing a $300 painting of a dinosaur at auction. What will this 'outrageous' character do next? Garriott further shocked interviewers by announcing plans to take a 'zany' adventure vacation, possibly on a boat or small plane.

Point of Origin: It's New!

Origin Systems, Inc. doesn't have an internal newsletter -- yet! But thanks to OSI fan Joe Garrity we know that's about to change! Check out the following internal memo from Fred Schmidt and Dallas Snell:

In an effort to promote communication within the organization, we will be creating a company newsletter, Point of Origin. This document will contain information from all departments and management. Some of the featured sections of this newsletter will include:

-- Information on changes in company policies & procedures.
-- Questions and answers.
-- Information from the Computer Gaming industry.
-- Answers from management to rumors running the "grapevine."
-- Featured employee, product, or company-related stories.

Good work, Joe - you could put this stuff in a museum someday! Now if only we regular folks could see this newsletter somehow...

Electronic Arts chairman Larry Probst announced today that the company's second quarter earnings were expected to rise 15% above expectations, thanks largely in part to the continued success of their line of sports titles and the quick adoption of the Super Nintendo computer gaming platform. This news isn't important to Wing Commander fans because Electronic Arts isn't the boss of us, and they never will be!