How is a Centurion like a gourami? We're usually quick to point out when a gaming review pays homage to Wing Commander... which often happens when a new space sim or interactive movie is being discussed. Gaming Excellence, however, has managed to do it in a review of Fish Tycoon, a fish breeding simulator. The analogy is just too good not to quote at length. You want to buy a Neon Tetra? I'm telling you, you do!

My favorite game as a lad was a neat little spin-off called Privateer.

Taking place in the then-relevant Wing Commander universe, Privateer made you a freelance space-pilot in an aging ship, willing to take any mission for the right price. As you made money, you upgrade your ship, eventually buying a new one entirely. This was a great way to add role-playing elements into a game while it slowly let you work your way through a series of story-driven missions.

You start off the game with a fish tank, fish food and some fish eggs. After a bit of waiting, your eggs hatch, and tiny fishies populate your tank. Once old enough, you can breed your fish and sell the resulting offspring for cash, which you use to buy a water pump to help maintain the health of your fish. Do it all again, then buy a snail to keep your aquarium clean. Wash, rinse and repeat, and you’re playing Fish Tycoon.

Ultimately, your goal is to cross-breed all your fish so as to re-discover the seven “magic breeds” of fish lost long ago in a plot device no one really cares about.

So, like Privateer, Fish Tycoon gives you plenty of toys and upgrades to buy as a result of your hard work. While quite repetitive, the game offers plenty of stuff to work towards. It even gives you an ultimate objective to keep the game from being entirely masturbatory.

This leads us to the main difference between Fish Tycoon and Privateer. While one game has you fighting pirates in a space ship, the other one has you taking care of fish. I can appreciate how “blowing stuff up” isn’t everyone’s cup of tea, but please please please give me something cooler to do than literally watch fish grow.

This artwork was created to get 'inside the head' of a Terran. It's an attempt to express that life aboard space stations is gray, dreary and sweaty - while space itself is colorful and exciting. Such pilots paint their fighters in bright colors in order to try and capture the feeling they have while they're in space. 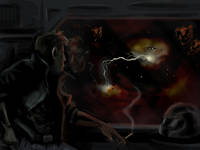