Here's another cool ex-Origin auction - a famous 'EA Borg' shirt being sold by a Wing Commander veteran! These shirts were given out at Origin some years back as a fun jab at their corporate overlords (those too young to remember may not know that EA's logo used to be a sphere, cube and triangle.) Mark Vearrier was nice enough to send is a large version of the central image some years back - it's available in our archive. Bid early and bid often here! 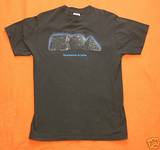 Even more cannons! This seems to be a more impressive weapon, with multiple lancing points and two magazines. You can see the modular intent, though - it could easily occupy the same visual space as the gun seen in the last installment.