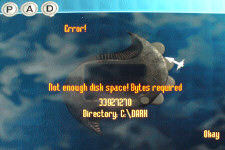 PC World has an informal article on complexity in the gaming market today. It takes issue with the view that multiple console versions is making things too difficult for consumers. The author correctly points out that setting up hardware and configuring software was significantly more difficult fifteen years ago, though the situation is clearly relative to the audience. As the number of people playing games grows, the average level of knowledge decreases. Wing Commander gets its usual shout-out in the piece. Not only did the series occasionally require highly optimized configurations, but drivers for all the new hardware devices that each WC game took advantage of also made setup more demanding. New players of the classic games have it easy today via services like GameTap where no arcane manipulation is required. Wing Commander fans with original DOS versions can also check out our Tech Support section if they need assistance.

Nostalgia trip. Anyone remember CONFIG.SYS and AUTOEXEC.BAT? HIMEM and EMM386? DOS/4GW and MS-DOS mode in Windows 95? Setting IRQs and DMAs and I/O addresses manually to get a sound card to output properly? You could fill a small book with all the trials and tribulations PC gamers have had to endure over the years sussing out design quirks in hardware and software just to get games like The 7th Guest and Wing Commander and Doom running functionally (to say nothing of "optimally"). And that's drawing the starting line in the early 1990s.

This is the second of three in-game medals. Here is Wing Commander Arena's "Silver Star", part of a system patterned after the awards in Wing Commander I. This art was not used in the finished game. The bird theme found in all three of these medals comes from the Firekkans... who we'll see more of in the future. The artist also drew a connection between the word Terran and a bird's talons.