Here's a reminder (and scans) of the Best Buy and Circuit City ads that take effect this Friday in the US. I love seeing this game on shelves and in print like this. It doesn't seem like these sales will be available online, but Circuit City is offerring the game for just $9.99 at its website. Orders over $24 get free shipping as well. A few virtual retailers have it listed for slightly less, but charge at least $4 to $7 to get it to you. Other major stores are still listing the game for $15.

Edit: Jetlag noticed that Best Buy has added EA Replay to its website! They did not have an online listing at all when we originally published this update. And the price is only $5 with free shipping! Get them while you can! 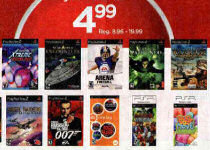 This is the first of three in-game medals. This is Wing Commander Arena's "Bronze Star", part of a system patterned after the awards in Wing Commander I. This one actually survived to the finished release, included as the 'Retro' medal. The next two weren't so lucky...