Do Some Academic Research

The CIC is getting another big boost of bandwidth, so now's a great time to download big files that you've been putting off. One of the larger items we host is the complete Wing Commander Academy television series. All thirteen episodes come in at just under three gigabytes. No matter how often we mention it, there's always tons of fans who are just learning about it for the first time. In addition to the main divx files, a variety of neat behind-the-scenes and production material is also available. The series is full of amazing stuff that every fan should see. Get started below! 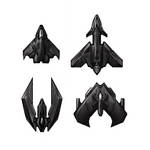