This is the final orthographic image. This is the Rapier II in the the textures it used in the finished Wing Commander Arena game. The interesting thing here is the never-before-seen details... like the gun inset and the landing gear! The latter, especially, is pretty interesting; it shows real dedication to detail, given that the game that was designed to be viewed from the top down. In fact, this art was done for a Privateer-style ship arming screen. 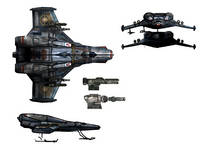