This is the second of three test 'clay' renderings, showing the basic 3D shape of ships designed for Wing Commander Arena. Unlike the Arrow rendering, the major changes incorporated in the Dralthi IX have already been developed at this point - specifically, the large engine scoop which replaced the Dralthi IV's smaller weapons pod. 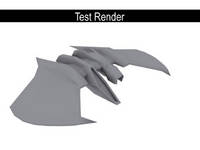