We lied - there's one more Arrow! This is the first of three test 'clay' renderings, showing the basic 3D shape of ships designed for Wing Commander Arena. Note how much closer this Arrow seems to be to the original Wing Commander Armada style than the ships which appeared in the finished game. 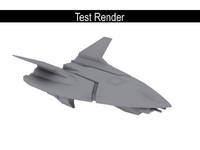