Several people have noted that the Bearcat seen in our last installment doesn't really look much like a... Bearcat. Well, you're in luck - here's another sketch which shows it from another angle. Remember that at this point in development this was a 'top down' game - so you would have seen the inset rather than the Rapier-style perspective view. It's still not a clear jump from Wing Commander IV to here, but you can see where it came from! 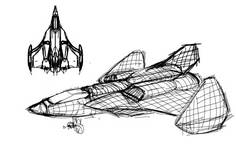