What's Beyond the Sword? Guns

Fumle is hard at work on a Wing Commander mod for Civilization IV: Beyond the Sword (announcement)... and he's posted a neat image: a set of in-game commodities and games based on those which originally appeared in Wing Commander: Privateer. Can you name them all? 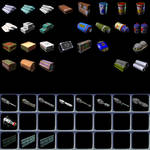 The Wing Commander Saga mod has posted a news update to inform fans of their current progress - and it sounds like things are going well! It sounds like they're in need of some extra voice actors, though - so if you've always wanted your voice preserved for all eternity in a FreeSpace 2 mod, sign up!

Second, new code features: New coding abilities that have been implimented into Saga include auto aiming, speed/distance multiplicator, better autopilot animations, and a better normal mapping code. These should lead to a more visually compelling final product, as well as a product that is even more in line with the original feel of Wing Commander.

Other progress includes the following:

In summary, the work is progressing forward at a good pace. In the mean time, we strongly encourage you all to login to visit the forums, check out our website, and send us some voice auditions.