There's a new fan project on the way! Rasmus Lindegaard Christensen is developing a Wing Commander mod for Civilization 4: Beyond the Sword's space mod. He's in the process of figuring out how to get ships into the game... and he needs our help with some of the mechanical elements:

However, there is an even greater challenge of imagination. I seek help for developing the tech tree, especially the non-military branches. I figured that maybe you could pass on the question on the website, with my email, and ask the imaginative fan community for ideas.

You can contact him here. He also sent along some screenshots of a Yorktown-class carrier in action: 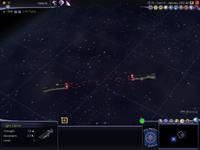 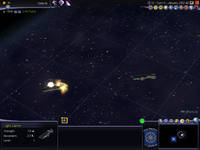 We made a mistake in our recent update about Total Immersion Software. In the writeup we called former Wing Commander producer Mark Day the company's founder. He was kind enough to let us know that he's only an Executive Producer (which still sounds pretty impressive). He also reports that the Total Immersion includes a whole host of other Origin veterans: Frank Roan, Tony Morone, Will McBurnett, Tony Salvaggio, Hideki "Tony" Ikeda and Chris Yesh. We wish them all the best!