In 1995 Chris Roberts and Origin Systems began pitching a Wing Commander movie to various film studios and investors. To help sell the project they created a series of lush painted storyboards to go with their presentation. Over the years several of these have made their way around the internet in generally low resolution scans from magazines - owing mostly to a PR release at Origin which accidentally claimed they were storyboards for Wing Commander Prophecy's film shoot. Today, however, we collect them all in their original format - showing everything from Blair in his space suit to paintings of the 3D Merlin character who almost was. You can find all 28 of them here. 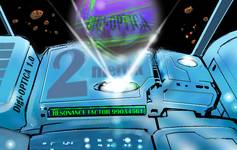