The Fatman has added the fourth track to his Wing One album on Amie Street! You can listen, buy and download it here. Based on their popularity in only the last few hours the first three songs have risen in price to thirteen cents each - still a steal, in my book! 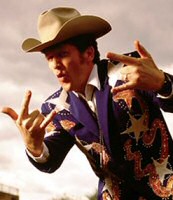 Tournament News Round Up

Everyone loved the tournament... and now you can revisit it by checking out the news coverage of the other sixteen sites involved in the battle! We've collected all the announcements, updates and wrap-ups written by the participants thus far in a nice fat list, located below. The winner's wrap-up is here, which is pretty cool - written in a pseudo in-continuity style. The coolest of these articles, though, is Achieve360Point's training article which gives a day-by-day breakdown of how they prepared for the tournament. It begins on release day with "At first, I think this game is horrible, but the more I play it the better it gets. Kind of one of those games that starts off slow then ends in a positive note."... and three days later: "I didn't play WCA at all today. I really wanted to though." Fantastic. Another notable entry is the Kotaku wrap up, which includes a video of the start of the tournament. Here's the whole enchilada: