Unless you're especially unobservant then you've noticed the impressively specific countdown timer located directly above this update. What does it mean? There is no specific release date for Wing Commander Arena yet... but the launch is imminent. Therefore, we're counting down to the next unannounced Xbox Live Arcade release. Games are posted every Wednesday at 9 AM GMT. If Microsoft announces that the 7/11 game isn't Arena then we'll move the counter forward to 7/18. Let's hope we don't have to do that too many times!

There's a new space shooter in town - Game Arts recently released Project Sylpheed as a budget title for the Xbox 360, based on their classic Silpheed franchise. A complex demo is currently available from Xbox Live Marketplace - the game features CGI cutscenes, very customizable ships and a lot of action! At a lower price than regular new releases, Project Sylpheed seems like a good way to waste some time until Wing Commander Arena is released. ActiveXbox has posted a review which ends up with a sentiment we can appreciate - it's cool that there's a space game, but we need a new Wing Commander:

The game plays in a similar way to Wing Commander on the PC years ago, except this has more confusing controls, poorer cutscenes and a much worse story... I’m pleased a space shooter has come out finally on the 360, but I would still like to see a full scale Wing Commander come back as that was the perfect one with great story, simple space shooting and nothing overly complicated, it was just right.

Additionally, Goliath reports that GameTrailers has put together a Sylpheed preview... which mentions Wing Commander. They say of the gameplay perspective: "Think Wing Commander and Descent Freespace and you won't be far off." Watch the whole thing here. 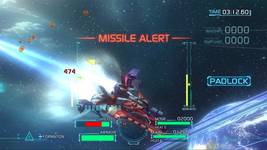 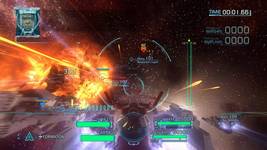