LeHah noted a small error at the EA Arcade site: a question about what languages Wing Commander Arena would be available in was answered with a response about Boom Boom Rocket. EA's community moderator was quick to respond with a correction and some good news:

Sounds like the game will be released in Europe and the US at the same time! If you haven't started posting to the official message board boards, give them a look -- it's a great way to interact directly with Electronic Arts!

We're Not Out of the Woods Yet

Hot on the heels of his clay armada, Mustanger has turned to wood for his next creation. The wooden hull of his Confed Light Carrier is mostly complete. After some finishing touches, the ship will be ready for paint. If the clay version is any indication, the final product should be pretty sharp. 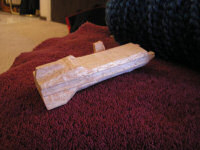 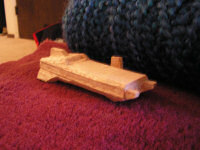 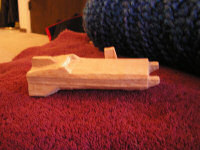 My next project is carving the Victory out of a wooden block. Should be able to make it a bit more accurate than with the clay I think. I'm pretty happy with the results so far.