Hopefully you've already realized that yesterday's updates were fake. Freespace: Coliseum was a loving criticism of both Arena and our favorite runner-up game series (which just goes to show you, there's a first time for everything...). As for the Crusader movie, I think we realized too late that you can't write a parody version of Uwe Boll... so an unfair number of people were actually 'fooled' by that one. Our apologies -- that's never our intention with April 1st updates.

Perhaps the coolest thing to come out of April 1st this year was a pretend article by German gaming magazine PC Games Online... which claimed in a serious tone that "Wing Commander Online" was in the works. That's interesting to me because it's close enough to the truth in 2007 that people can believe it... and in another year's time, it might not even be a joke.

This one is no April Fool's joke: I am proud to announce that the CIC is adding a new staff member! Asher "Frosty" Lawson joins our ranks with a focus on graphics and layout work (but you'll also be seeing his name on update bylines). This is a unique honor: he is the first staff addition in almost eight years -- since KrisV joined the team in 1999. Frosty is an excellent web designer, a dedicated WingNut and an all around good friend. We're lucky to have him, especially now that the Wing Commander community is poised to grow by leaps and bounds. Long live the Confederation and look forward to great new content! 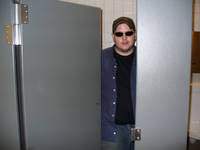