The PC version of Command & Conquer 3 should begin hitting stores on Tuesday. This classic franchise recently went back to its roots with the rerelease of many classic titles in the series. The new game's lavish use of live actors in high quality video cutscenes has given many Wingnuts hope that future Wing Commander titles will also feature big Hollywood productions. Whether or not more FMV really does lie in the future, EA's continued investment in its big hits of the mid 1990s is a good sign all around. A demo is available, and initial reviews seem very positive. An XBox 360 release is also expected in early May. 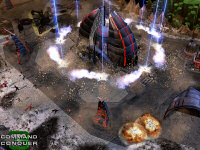 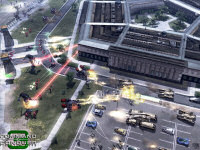 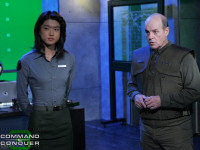 ...Command & Conquer 3 Tiberium Wars(TM): Kane Edition is a definitive collectible for any Command & Conquer or Real-time Strategy fan and will feature an enormous amount of exclusive content including a bonus DVD with a behind the scenes documentary, deleted scenes, a blooper reel, a series of gameplay strategy videos, and more.