While the WC Pioneer project has been relatively quiet in public, Howard Day has been working on some new visuals behind the scenes. The project's Hunchback fighter has been given a bit of an overhaul and now looks a lot better than it did 18 months ago. The engine upgrades have also been redesigned to fit it with the new art style. Built-up dirt and corrosion on the cockpit windows are another new new visual touch that's been added.

I've been working on getting the Hunchback up to the new graphical spec - the old one was just too rough and... blech for it to pass muster amongst it's newer brethren. I've also been working on the the engine upgrades - the external modules they will attach to the engine hardpoint on your ship. This is another area where I just didn't like the quality of art I'd made previously, and even if I did... it simply doesn't fit in with the new stuff.

I've also put together a rather minor in-cockpit effect. It's a kind of scum - dirt and just residue, I guess, that builds up on the outside of your cockpit windows as you fly about. It collects slowly, and only gets removed when you do a full/complete repair. I guess they throw the window wash in for free. There are also scortch marks planned using the same basic system. Ideally, these would only show up once you've flown through an explosion at close range. 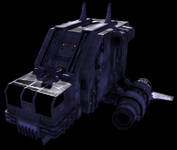 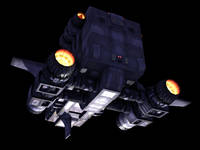 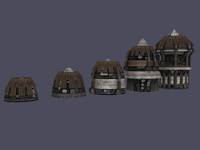 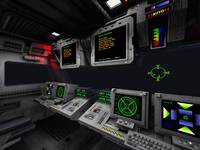