A new version of DOSBox has been released, and it includes a handful of neat improvements for Wing Commander fans. Like the last few releases of the program, version 0.70 plays all DOS Wing Commander games very well. Several speed optimizations were made and joystick support should be improved. Additional scalers were added so that players could use a larger window if fullscreen mode gave them problems before. The program also now attempts to guess speed requirements by default. One of the most common questions about DOSBox has been how to adjust the cycle values to play each game smoothly. This is all performed automatically now. It's not perfect, but it should be a big benefit to new users. For example, our WC3 testing showed a little more skipping during FMV playback versus improved smoothness while in flight. Users are still free to go in and manually tweak these factors if they would like more control. You can download the new DOSBox here. Our step-by-step walkthroughs in the Tech Support section have also been updated to reflect changes in 0.70.

Wing Commander Star Is A Hero

With so many big sci-fi names guest-starring in NBC show Heroes (including Star Trek's Sulu, George Takei, and ninth Doctor Who, Christopher Eccleston), it was only a matter of time before someone with Wing Commander history showed up. That time came this week as our very own Admiral Tolwyn, Malcolm McDowell made his first appearance as the show's Mr. Linderman. IMDB's section for Heroes describes it best.

Its main plotline surrounds the stories of 8 people who discover abilities they've never had before. Some of them immediately embrace them, others fear societal judgement and keep them a secret. Some of them discover a prophecy that will result in a possible cataclysm, others will use their powers to change their lives and the lives of others.

McDowell's character Mr. Linderman is the owner of the Linderman Group, and runs a hotel and casino in Las Vegas. He also appears to have mafia connections. It's quite likely that McDowell's character will appear in future episodes but as the show is currently on hiatus until April 23, so we have a little wait before we find out. McDowell can be seen below enjoying a spot of cooking in his hotel's restaurant kitchen. Thanks to Rick Salemi for pointing this out. 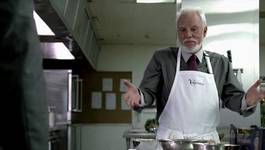 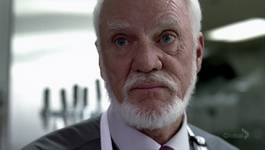