That's Just How I Rollins

Skyfox has found something of interest for Wing Commander fans in the UK: actor Courtney Gains, who played Lieutenant Ted Rollins in Wing Commander III, will be appearing at a Memorabilia Convention in Birmingham on March 31st and April 1st. Some lucky locals can celebrate April Fool's Day by meeting Radio Rollins! 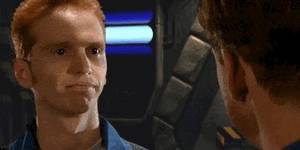 But Is It Ours?

The professional opinion seems to be that Wing Commander Arena is a fun game... but many hardcore Wing Commander fans are worried that it won't make proper use of the classic series' extensive continuity. Producer Sean Penney was kind enough to answer a few questions, giving us a glimpse at the kind of work and research Electronic Arts has put into making this a true 'Wing Commander' game. Watch for references to everything from Secret Missions 2 to Chris Roberts' Wing movie!

Q. How will Arena appeal to existing Wing Commander fans?
A. This was a question we asked ourselves a lot during development as we wanted to ensure we did the IP justice. We balanced that with a desire to introduce the WC universe to new players. We were careful in our selection of ships and queried the WC community on our choices. The ships we used are favorites from across the series, and they are true to the IP in more than just form - function and balance were important considerations. Our goal was to offer a fast-paced fun arcade space combat game to WC fans that would also have broad appeal. And being able to fly Kilrathi ships has me excited as a fan too. It's an Arcade title - so think of Wing Commander Arena as a slice of the Wing Commander experience.

Q. Will the game include any familiar Wing Commander elements -- ships, history or the like?
A. Oh yes of course - we've advanced the history in a minor way, and the ships are drawn from across the WC universe, and will be familiar to WC fans. We've updated some to fit in with the frontier-like atmosphere of Arena. For Example:

The A-17 Broadsword Executioner: The Broadsword was first constructed for planetary bombing raids during the Pilgrim War, and was soon adapted to carry torpedoes. Lightly armored but sporting heavy weapons and good missiles as well as a deployable turret and a tractor beam, this bomber is perfect for taking on small, quick fighters.

The Dralthi IX Rhino: By far the heaviest Dralthi ever constructed, the Rhino is the equal of the Vaktoth or the Hhriss. Heavily armored and armed, with moderate speed and maneuverability, the Rhino hits hard and keeps on hitting.

Q. When and where in the Wing Commander universe is the game set?
A. The Epsilon Sector, 2701. The Terran Confederation and the Kilrathi Assembly of Clans have beaten back the Nephilim hordes, but at a terrible cost. As the shattered governments focus on rebuilding the core worlds, the frontier has descended into lawlessness. Regional governors hold power through force of arms, as humans and Kilrathi alike fight amongst themselves using the weapons of the last war. Privateers, outlaws and worse take advantage of the situation, eager to make a quick credit in the galaxy's most volatile arena...

Q. Can we expect to see any promotional tie-ins with Arena... web presence, Gamer Pics, XBox themes, etc.?
A. All good ideas